In the first major attack against an American-led base in South Vietnam, a heroic stand by a Special Forces A-Team and its allies on July 6, 1964 defeated a Viet Cong force three times its size.

Detachment A-726, 7th Special Forces Group, was commanded by Captain Roger Donlon. The 12-man Green Beret team was assigned to train and advise 311 South Vietnamese soldiers and 60 Nung (ethnic Chinese) mercenaries at Camp Nam Dong. Attached to the team was Australian army Warrant Officer Kevin Conway and Gerald Hickey, an American anthropologist studying Vietnam's indigenous tribes. Located some 30 miles west of Da Nang and 15 miles east of the Laotian border, the 5-acre camp, nicknamed "Five Cents," sat on a rise in a valley. In the middle of the camp was an inner perimeter about the size of half a football field manned by the A-Team and the Nungs. The outer perimeter was surrounded by a double barbed-wire fence defended by the South Vietnamese. Camp Nam Dong was an obstacle the Viet Cong (VC) wanted to remove from one of the communists' main infiltration routes into the South. The camp was a finger in the eye of Ho Chi Minh.

Captain, Donlon had reason for concern. Following a three-day patrol in the area surrounding the camp, one of his team's medics, Sgt. Terry Terrin, reported that VC had executed two village chiefs friendly to the Americans. The villagers were nervous and reluctant to offer any more information. Years later, it was confirmed that they probably had 100 VC among the 300 Vietnamese we were training."

A foreboding aura enveloped the camp. One of the Green Berets, Staff Sgt. Mervin Woods, summed up the feeling of all the defenders when he wrote to his wife that "all hell is going to break loose here." Woods' prediction came true around 2:30 a.m., July 6. As Donlon was completing his night rounds checking the camp's defenses, he opened the door to the mess hall, which promptly exploded from a mortar round. Another round set the command post on fire.

"They had superb planning," Donlon says. For example, he said the thatch roofs of the command post and mess hall were hit first with white phosphorus grenades, so the resulting fires would illuminate the inner perimeter. Immediately after the mess hall exploded, enemy tracers, hand grenades, and small-arms and machine-gun fire from a reinforced VC battalion of some 800 men ripped through the camp. It was the opening salvo of what would be a five-hour battle.

Donlon and Master Sgt. Gabriel "Pop" Alamo, a 45-year-old WWII and Korean War vet, began dousing the fires while removing weapons and ammunition from the command post. Meanwhile, radio operator Staff Sgt. Keith Daniels was able to send out only a partial distress signal. "Under intense mortar attack" was all he could transmit to Da Nang before a mortar round destroyed his communications shack.

After helping Donlon, a badly burned Alamo joined Staff Sgt. Ray Whitsell and Sgt. Michael Disser at their 81mm mortar pit near the main gate. It was one of three, along with two 60mm mortar pits, ringing the inner perimeter. Disser's illuminating rounds revealed hundreds of VC swarming through the outer perimeter. "It was the most frightening sight of my life," Disser said.

It was at that mortar pit, which Donlon says they called "the death pit," that Conway was shot nearly between the eyes, becoming the first Australian to die in the Vietnam War.

Donlon was hit by shrapnel from a third mortar round and lost all his equipment except for his AR-15 rifle. Bleeding from multiple wounds, he moved to Disser's position and killed three VC preparing to blow up the main gate. "By then, my boots had been blown off," Donlon said.

Sgt. John Houston was peppered with an intense grenade assault on his position and as his ammunition was running out he refused to take cover, calling out to a fellow soldier to throw additional rounds to him and reloaded the magazine while exposed to the heavy enemy gunfire." Houston fought in this "dangerous position," behind a berm of dirt that had been excavated for a new command post overlooking the ammo bunker, according to Donlon, for more than two hours until mortally wounded by the enemy.

After declining treatment from the other team medic, Sgt. Thomas Gregg, Donlon attempted to check on Sgt. 1st Class Vernon Beeson in a bunker 40 yards away. But a hail of mortar rounds and small-arms fire prevented it. Instead, Donlon made his way back toward the mortar pit.

There, he found Disser rapidly dropping rounds into a "glowing" mortar barrel, a badly wounded Alamo and 1st Lt. Jay Olejniczak launching grenades with an M-79 and firing his M-16. They were taking aim at VC who were lobbing a constant barrage of grenades on the Americans and Nungs from just outside the inner perimeter's gate.

According to his Medal of Honor citation Captain Donlon "Noticed the enemy attempting to breach the main gate, he again dashed through a heavy volume of automatic weapons fire to abort the hostile action," it reads. "Although he sustained a serious wound in this courageous action, he demonstrated superhuman effort, reached the gate and prevented entry of enemy troops."

With their position becoming indefensible, Donlon ordered the group to move to a safer area. He and, by now, a grievously wounded Alamo covered the withdrawal. Donlon helped Alamo to his feet but as they attempted to move, a VC mortar round landed at the entrance to the pit. The blast killed Alamo and wounded Donlon for a fourth time. "Pop had no quit in him," Donlon said. "I remember him during our training runs. He never came in first, but he always came in. He provided maturity and stability for our team."

Dazed but determined, Donlon continued on as he had the entire battle. Seemingly everywhere at once, the captain administered basic first aid, rallied spirits, hauled weapons and ammunition, and fought with every weapon he could get his hands on. "Teamwork and resolve is what got us through the battle, we were outnumbered, but determined. We all resolved during our training that we would never be taken prisoner. We would go down fighting."

After helping some Nungs re-establish a mortar position and then assisting Woods at his 81mm mortar pit, Donlon checked on Gregg's makeshift aid station, where the medic was working furiously. Refusing treatment once again, the captain moved toward the main gate, where he expected a final VC assault.

About then, just after 4:30 a.m., the sky erupted with a brilliant flash, courtesy of a flare from a U.S. plane. Air cover from Da Nang had finally arrived, but the battle would rage for another three hours. As the flare burned out, the enemy taunted the defenders with a loudspeaker, ordering them to surrender. A well-placed mortar round from Brown silenced the harassment. "In my mind's eye, I see Brownie's mortar round dropping directly down that megaphone," Donlon recalled with a smile.

With air cover arriving, the VC began retreating. As the sun rose, it revealed a devastated landscape. An estimated 154 enemy were killed, with many of their bodies still littering the battlefield. More than 50 South Vietnamese and Nungs were killed, along with two Americans and the Australian Conway. Some 65 of the defenders were wounded.

After receiving his Medal of Honor at the White House in November 1964, Donlon humbly said he thought everyone on his team deserved the same award. "I back away from personal accolades because it can too easily be regarded as boastful. Hopefully, our actions at Nam Dong can be inspirational. We must honor and respect those who made the ultimate sacrifice." 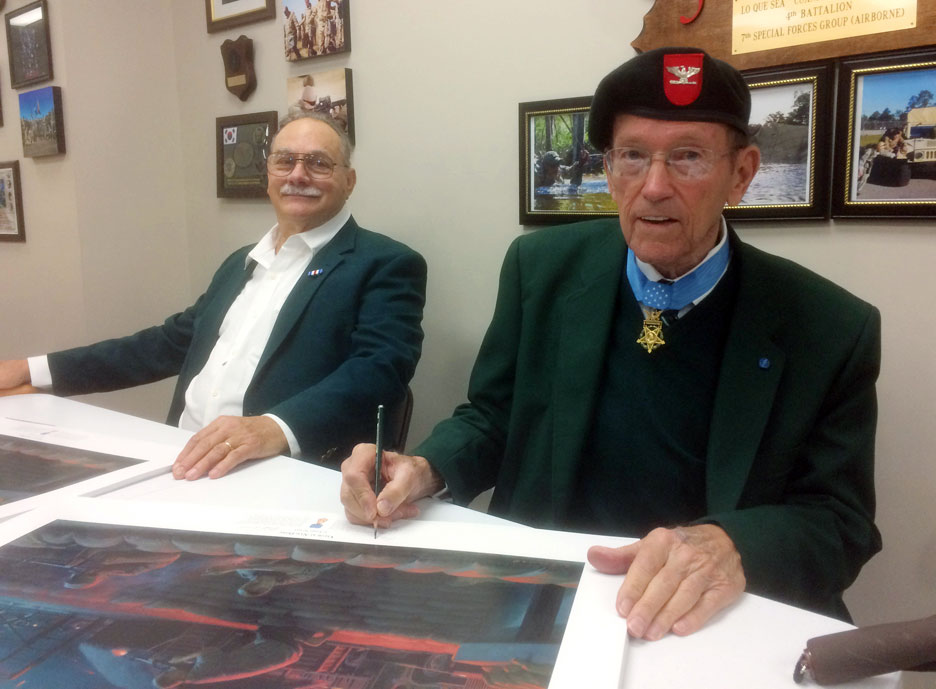