The completed EANGUS picture titled Enlisted Guardians. The client requested that I not post any progress or the finished painting until it was presented at the PNGAS convention dinner. It was unveiled last night just in time for Veterans Day. The picture contains a wide variety of soldiers and equipment, uniforms, races and about equal distribution of men and women that make up the Army and Air Guard. Part time soldiers who are called to serve other citizens in times of need like hurricane relief, flood and wild fires they are also a big part of the National Defense serving abroad. The Militia soldier and early American flag symbolize the beginning of the country and direct lineage from then to today. The group of soldiers and airmen show how much change has occurred sine 1775 and look toward the future generations who will take their place. As I was working on this picture the Guard lost aircraft and personal in combat or accidents in the states. The two C-130 aircraft on the right of the picture were lost in crashes. The first one from Puerto Rico went down in Georgia and the second aircraft from North Carolina was lost out West fighting fires. The kneeling airman on the right represents the 8 Pararescue lost in combat from the 106th in New York. Always Ready and Always There is the motto for the Guard and aptly describes them and their missions. 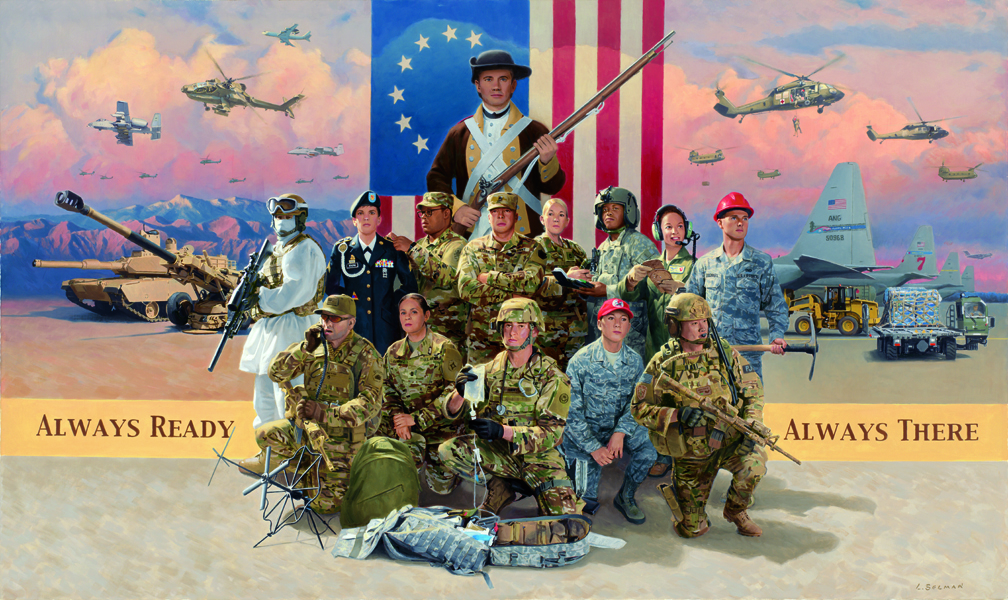