Description of the scene: In the early morning hours of July 6, 1964, Special Forces Camp Nam Dong, in the Republic of South Vietnam, was attacked by a large Viet Cong guerilla force. Detachment A-726, a 12-man Special Forces unit from 7th Group, fought desperately to hold off concerted enemy attacks from in and outside of the camp. For five hours the battle raged back and forth, at one point a 3 man Viet Cong sapper team attempts to breach the front gate and is killed by Captain Roger Donlon while Lt. Julian Olejniczak returns enemy fire and Sgt. Mike Disser fires the 60 mm mortar. Captain Donlon would receive the Medal of Honor, Lt. Olejniczak and Sgt Mike Disser the Silver Star for their heroic action. Captain Dolon was the first Medal of Honor recipient for Special Forces and for the Vietnam War.

The painting will be presented December 5th and will hang in the entrance of 7th Group Special Forces, Donlon Hall at Eglin Air Force Base.After the presentation Col. Donlon and Cpt. Disser will sign 64 limited edition prints. To reserve a copy use this link on my web site: https://larryselman.com/roger-donlon/ 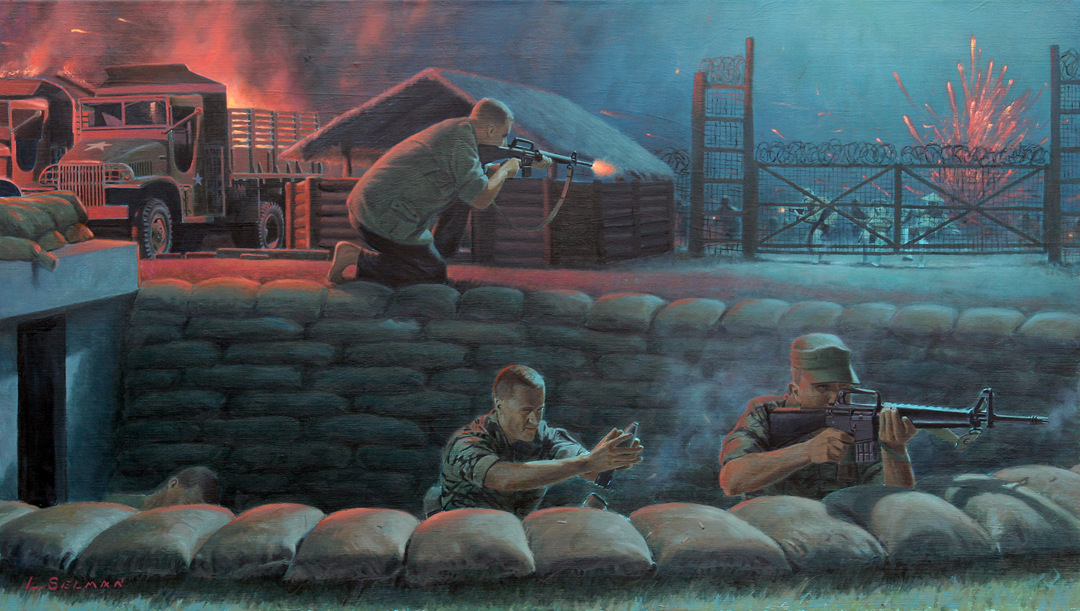 This is a pretty unusual picture for several reasons, its not the subject but the colors and turnaround time that made it different. The picture is a night fight light up by a flare and burning buildings and truck. Obviously the fire is warm light but the flare could be one of several temperatures. The choices for that were either blue or green which would also cover the night colors. Using a color wheel a picking a narrow range of colors to work from helped simplify the painting choices. Going with a blue-green night and flare color and yellow to orange for the fire. The rest of the colors would be muted along either of those temperatures and dropping any mid tones down to very dark or light depending on what the light source was. This green blue to red orange is very common in sci-fi and fantasy but I had never used that in 36 years as a artist. The other issue was time. While I had been working on this over a period of time it was only after finishing the EANGUS picture that I had a window to finish this one. Normally after an intense job of many weeks I need to recharge the mental batteries then focus on the next picture and set that image up in my head. There wasn't time for that to happen, not a big deal because its been done in the past and taken with the unusual color pallet there were more than a few days to adjust to the color scheme.